"The main event was a world première, “Iam ver egelidos (Now spring brings back unchilled warmth),” by Latvian composer Ugis Praulins (b. 1957). Praulins is an ex-choirboy and longtime rocker who has found his way into composing for classical ensembles; his is an important voice. A commission by the SLCC, it was the gift of an anonymous donor.
“Iam,” with a text by Catullus, is a complex work. It starts and ends with whispers, like spurts of spring wind, and mixes rock rhythms with phrases that influenced by liturgy and other different sources. In places, it features a stratospheric tessitura for the first sopranos, and it challenges the choir throughout. Praulins has done a terrific job of accompanying the text in a knowing and sympathetic way; with luck, Barnes will give audiences a second hearing of it soon."

http://www.stltoday.com/entertainment/arts-and-theatre/reviews/music-review-st-louis-chamber-chorus-explores-latin/article_e316711e-07c9-5cea-9700-727f1ae0625c.html
Sarah Bryan Miller is the  Post-Dispatch's classical music critic. Follow Bryan on the Culture Club blog, and on Twitter at @SBMillerMusic.

"The world premiere of a new commission by Ugis Praulins was a highlight."
http://www.stltoday.com/entertainment/ 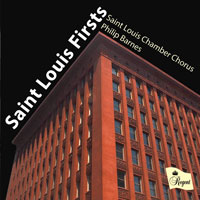 Following the acclaimed Midwest premiere of his Missa Rigensis bu the Chamber Chorus, the Latvian composer Ugis Praulins agreed to write a new work for the 2013-2014 season. Having previously written a “medieval/new age rock opera” titled Odi et Amo after a poem by the Roman poet Catullus, (c.84-54 BCE), Ugis was already open to setting another ancient text, and agreed to compose a new version of Catullus's salute to the spring, when he could finally return to Rome from his service in the province of Bithynia. The excitement of the verse is amply conveyed through whispers, fanfares (“ad claras”), glissandi, and – at one notable moment for the basses – the injunction to sing “alla urban groove!” 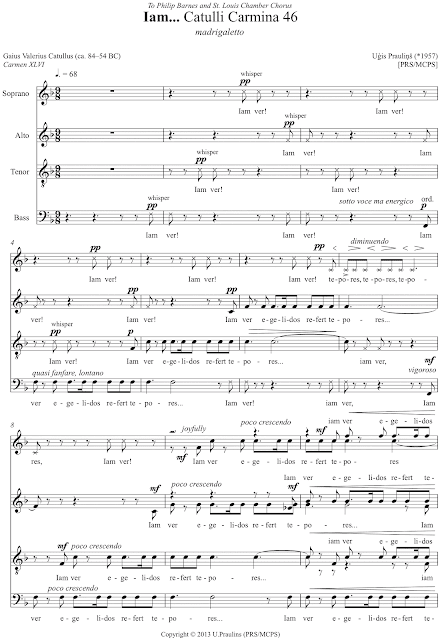 BBC: BBC Music Magazine (***** 5/5)!
Saint Louis Chamber Chorus Philip Barnes: conductor
JONES: Psalm 23 (premiere) • MACLEAN: Slow Gold (premiere) • CHILCOTT: Before the Ice • POTT: Good Day, Sir Christëmas! (premiere) • HELVEY: An Evening Song (premiere) • JOHNSON MANNING: Ode to Love (premiere) • BINGHAM: Solomon and Love (premiere) • RODNEY BENNETT: A Contemplation Upon Flowers • PRAULINS: Iam Ver Egelidos (premiere) • BINGHAM: Aquileia (premiere) • GUILLAUME: Le Dernier Voyage (premiere)
“Consistently outstanding.” — BBC Music Magazine
A groundbreaking recording of 11 choral works — 10 of them new commissions by the Saint Louis Chamber Chorus — from a diverse range of global composers. For six decades the Saint Louis Chamber Chorus has dedicated itself to presenting the finest examples of choral literature. In recent years there has been an emphasis on presenting the work of living composers. In the mid-1990s a composer in residency program was begun that flourishes to this day, and numerous supporters began to commission new works especially for this choir. The fruits of their generosity may be heard on this recording, of which all but two tracks are first recordings.
https://www.allegro-music.com/Download/PDF/jun16_NRCLASSICAL.pdf