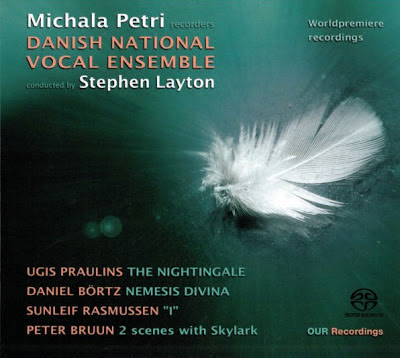 LISTEN to the samples HERE:
http://www.allmusic.com/album/ugis-praulins-the-nightingale-daniel-börtz-nemesis-divina-etc-mw0002252283

Commissioned by the Danish Radio 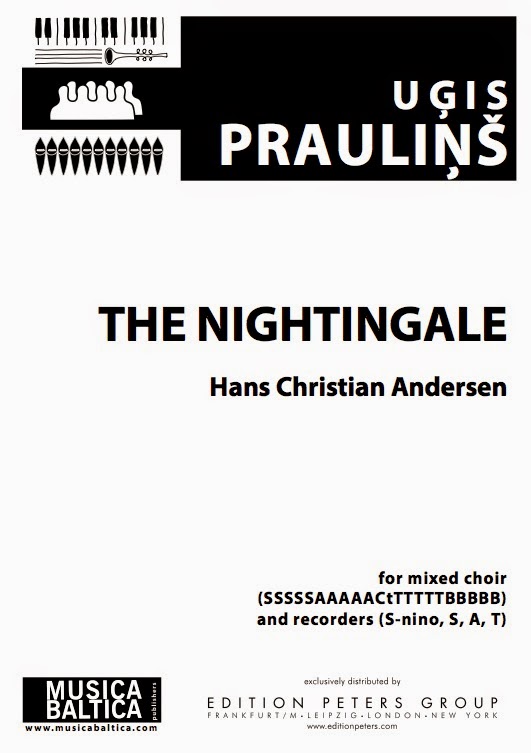 
An essential disc of world premieres that stuns the senses and absolutely delights the ear.


Latvian composer Ugis Praulins has created the best work on the disc, taking eight sections from Hans Christian Andersen’s The Nightingale to make a 30-minute piece of great theatricality and ecstatic utterance, notwithstanding what also amounts to a full-fledged recorder concerto as well. Praulins has a wide and eclectic background that refuses to be pigeonholed, so I won’t try here; suffice it to say that this piece grabs you immediately while also giving the choir an intense workout in choral virtuosity and range, the recorder commenting perfectly along the way.
—Steven Ritter
Published on August 25, 2012
http://audaud.com/2012/08/nightingale-ugis-praulins-the-nightingale-daniel-bortz-nemesis-divina-sunleif-rasmussen-i-peter-bruun-2-scenes-with-skylark-michala-petri-recorders-danish-na/

And here is another recording worth checking out: Michala Petri, recorder superstar, teamed with the Danish National Vocal Ensemble and conductor Stephen Layton (another Brit!) in four works composed especially for her. The result is The Nightingale from OUR Recordings, another multichannel must-have. Just listen to the first cut:
“My word! That’s lovely!” These books went all over the world / and so in course of time / some of them reached the Emperor / there he sat in his golden chair reading: / “But the nightingale is really the best of all.” (After Hans Christian Andersen)
The rich invention of The Nightingale (music by Ugis Praulins, b. 1957), based upon Andersen’s beloved tale of the emperor and the nightingale, is matched—at least—by the other standout work on this SACD, 2 Scenes with Skylark, on texts by Gerard Manley Hopkins.
http://www.pstracks.com/classical_corner/tis-choral-season/4392

Ugis Praulins’s The Nightingale is a recent score is an adaptation of the Hans Christian Andersen’s story of the same name. It is the same tale employed by Stravinsky for his 1917 opera Le rossignol. The story tells of an emperor who rejects the song of a real nightingale for that of a bejeweled mechanical one. However, when the emperor falls deathly ill the nightingale returns and sings, and God is so moved by its song that he leaves and the emperor recovers. Praulins’s musical setting was composed in 2010 for the Danish National Vocal Ensemble and flutist Michala Petri. The Latvian composer is known for his free mixture of influences as wide ranging as heavy-metal bands, folk music, film scoring, and Renaissance counterpoint. These influences all converged in this score creating what one reviewer described as a “continuously changing tapestry of sound that nevertheless hangs together remarkably well, effortlessly expressing the fancy in the Andersen fragments.”

...absolutely essential disc for fans of Michala, choral music, Nordic composers, and contemporary music with a HEART as well as with a 'system.'
http://www.crotchet.co.uk/6220605.html?id=xE3QDYvE


The Nightingale (2011) by the Latvian Ugis Praulins is essentially a 30-minute concerto, consisting of a series of eight colourful tableaux based on Hans Christian Andersen’s tale of the Emperor and the Nightingale. It demands an astonish choral range of four octaves. The seventh section, ‘The Artifical Bird’, is a marvel of invention, with percussive imitations and multiphonics