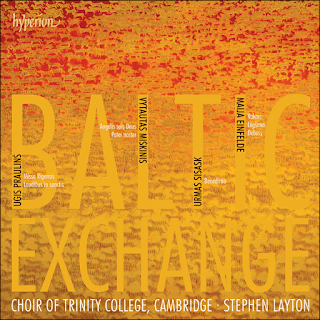 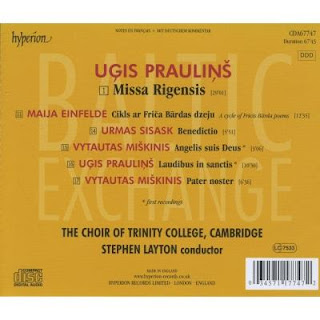 Exultation of an altogether more flamboyant kind is the subject of Laudibus in sanctis. Specially written for this recording and dedicated to Stephen Layton, it is another example of Ugis Prauliņš undoctrinaire approach to composition, where "everything is possible and nothing is absolute", an open-hearted attitude Praulins attributes to his background in rock music. Also from rock music, surely, comes the insistent rhythmic drive of much of the music, while the filigree ornamentation is decidedly Baroque. Baroque, too, is the cast of this extended setting of Psalm 150 as a multi-sectional cantata, as are the sustained antiphonal writing and the solo/tutti exchanges. Yet for all its eclecticism of reference the piece has a compelling unity of purpose which reflects the unceasing joyfulness of the words. The sturdy opening pages are an exhaustive and exhilarating exploration of A minor; throughout the piece the chords are frequently of massive density, yet are never opaque, and for the final exhortation ("Let everything in the world that feeds upon the air of heaven") the composer summons up music of dazzling brilliance and abandon.
In the reverberating silence the last word, like the first, should go to Ugis Prauliņš: "That which moves you is what endures. This is the kind of music I strive for." All the music on this disc is without doubt moving (and much more besides), and like the resilience of the Baltic people in the face of intolerable oppression, it will surely endure.
Gabriel Jackson © 2010


Choir of Trinity College, Cambridge / Layton
Hyperion CDA67747  /Release date February 2010
Baltic Exchange is a stunning collection of unaccompanied choral works by four living composers, all written within the last decade. Gabriel Jackson's informative liner notes begin 'Singing lies at the heart of not just the musical, but the social and ritual life of the Baltic states' and this recording is certainly testament to that. Missa Rigensis written by the Latvian composer Ugis Praulins is a substantial piece and makes for a powerful opening. The Kyrie eleison is as dramatic as it is beautiful and the warmly resonant acoustic of the Lady Chapel of Ely Cathedral gives an added dimension to the sound. The subsequent movements demonstrate a variety of textures and harmonic ideas but with an underlying feeling of beauty and peace. Praulins often uses tonal clusters to great effect and in the Crucifixus creates a striking raindrop effect within the texture. He also writes for low bass in certain passages that adds a further depth and echoes the basso profundo style. Maija Einfelde's settings of three poems by one of Latvia's best-loved writers follow this. Here each movement is filled again with glorious harmonic colours, created from sustained tonal clusters. The four remaining shorter works are also performed superbly by The Choir of Trinity College, Cambridge, who are entirely at home with this music and create a suitably solid and authentic sound. Look out too for 'About 2500 Tigers' on the front cover.  Reviewed by Dawn Cooke 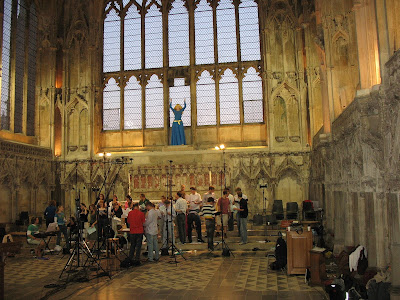 Printed - 8.90 EUR *
* Hard copies can be ordered via email. Customers from the Baltic states (Latvia, Lithuania, Estonia) - please write to musbalt@latnet.lv, clients from other European countries - order via sales@editionpeters.com, US and rest of world - sales.us@editionpeters.com 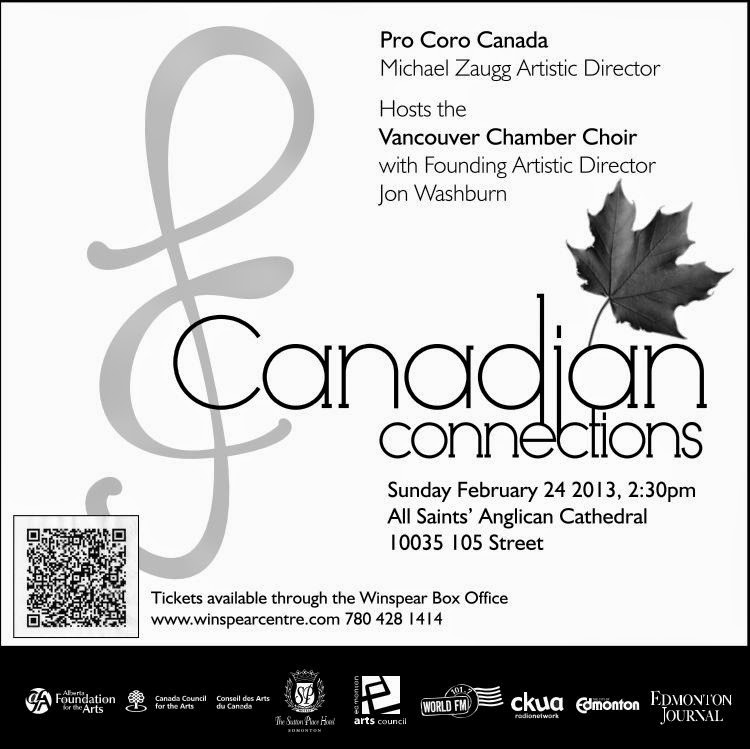 When we got to the rehearsal, Pro Coro was practicing “Laudibus in sanctis” by Latvian composer Ugis Praulins (with lots of squiggles over the letters, but help me if I know how to do that on this computer). (Editor’s note: Ugis Praulins.) It is such a great piece filled with Baltic melodies, and they sing it so beautifully. I could see everyone in our group captivated by it, and all the fatigue we were feeling evaporate as we realized how good tomorrow’s concert is going to be. Vancouver Chamber Choir On Tour Feb 2013

2 Feb 2014 By Joanne Lam » February 20, 2014, 7:00 am Concert
Soundstreams: Canadian Choral Celebration at Koerner Hall
20 Feb 2014
Michael Zaugg and Pro Coro Canada took to the stage after intermission to perform U#is Prauli!" ’ Laudibus in Sanctis (2008), a euphoric composition set to the text of Psalm 150. This was by far the strongest and most assertive performance of the concert; Pro Coro’s singers demonstrated a strong sense of solidarity and confidence in their ensemble which was communicated quite magnificently through the music itself. Last of the program was Henryk Górecki’s Miserere (1981) which showcased solidarity in a different sense – namely, in the way breaths were drawn between words, which in turn gave shape to Górecki’s concerns about the state of political turmoil in Poland the year this piece was written. Laudibus in Sanctis made for a quietly intense (and as such, daring) conclusion to Soundstreams’ Canadian Choral Celebration, a gradual slow burn of voices which eventually brought the audience back to where the afternoon began: a choir, standing together in stillness and in silence, seeing with their ears.
JOANNE LAM
Joanne Lam is a writer and cellist currently based in Toronto. http://joannelam.com/ @joannewklam

Pro Coro Canada performed a work by Latvian composer Ugis Praulins.
Pro Coro Canada, led by Michael Zaugg, fared better. Zaugg led a spirited performance of Laudibus in Sanctis by the Latvian composer U#is Prauli!". Boldly and rhythmically chordal, it was something that a top-notch chamber choir could really sink its teeth into. Zaugg went straight to the heart of this rich and powerful piece.

'Laudibus in Sanctis' (2008) by Uģis Prauliņš was performed by Pro Coro Canada and Michael Zaugg (conductor) at the 'Canadian Choral Celebration' concert on February 2, 2014 at Koerner Hall (Toronto, Canada).

***
Zaugg mounted the podium once more to conduct both ensembles in two Mendelssohn motets and the PCC alone in another gorgeous piece, Laudibus in Sanctis by another Latvian composer, Ugis Praulins.
OTTAWA CITIZEN, OTTAWA CITIZEN | 05.11.2014
Michael Zaugg, director of Cantata Singers of Ottawa. Photo by Michael Zaugg.
Canadian Connections III Cantata Singers of Ottawa with Pro Coro Canada
***
1 Jun
Perhaps the most challenging is Latvian composer Ugis Praulins’ Laudibus in Sanctis. “He’s one of those composers not many people have heard of, but people are starting to get excited about him. His composition is full of depth and complexity, but it’s very tuneful and melodic. It’s very rich and thick. There are 24 voices in the choir and there may be 20 different rhythms going on at any one time.”
Sirens Pro Coro Chamber Choir Sunday, June 1 at 2:30 p.m. All Saints Cathedral 10035 – 103 St.
Choir lures audiences with Sirens

Another SOLD-OUT success of Pro Coro Canada at the opening concert of the 2014-2015 season in the frame of Alberta Culture Days.
1700 people came to hear the choir, with guest Richard Eaton Singers, in a staged performance of Talbot’s Path of Miracles.
Critics are saying:
Zaugg led a spirited performance of Laudibus in Sanctis by the Latvian composer Uģis Prauliņš. Boldly and rhythmically chordal, it was something that a top-notch chamber choir could really sink its teeth into. Zaugg went straight to the heart of this rich and powerful piece.
This was by far the strongest and most assertive performance of the concert; Pro Coro’s singers demonstrated a strong sense of solidarity and confidence in their ensemble which was communicated quite magnificently through the music itself.
The performances themselves were stunning: ... the best choral singing I have heard in this classical music season.    http://www.michaelzaugg.info